I have always envisioned when drawing from life that I was building up to a surface from darkness. I imagine that the interior core of the subject is amorphous darkness, and I am layering the skeletal and muscular structure over this darkness until the planes are articulated and light and color hits the surface.

Ultimately, the surface is what we see. I feel the surface implies what is beneath. My interaction with the surface of a paper or canvas is manipulation of a plane too. The processes of painting and drawing involve finessing a surface to indicate space and texture.

Relief woodcut is created through gouging away at a surface then inking that impression to make an image. Rubbings of surfaces, gravestones specifically, has been a way for me to capture a relief and a surface with intricate layers of meaning rich with text, symbols, history and weathering all of which are indications of the passage of time and a life lived, the human remains beneath the stone as much as the existence of the stone itself.

In my work at Hahnemann Hospital drawing human cadavers, the interiors of the cadavers of the Gross Anatomy lab are revealed over the course of the academic year, methodically and scientifically. The pectoral muscles are folded over the shoulders revealing the breast plate and ribs, the layers of skin and subcutaneous fat are removed early on and usually mostly gone by mid year, throughout the body’s frame. The lungs, heart and bowels are beneath the breast plate and ribs. Skin and fat on the face are removed, the scalp is peeled back, the skull opened and the brain removed. I feel I have seen the core, that interior black space I have imagined. The inner workings. However, my drawings attempt to capture the textures and color in what is left behind of see-through people, of human remains.

The complexity of this shift in materiality and surface almost indicates a simplicity in who and what we are, perhaps false simplicity. We are all human we are all made of this stuff, and we all die. Looking directly at death as a subject to me is a logical way to better understand life. Living is the process of dying, dying is a life process.

I am often looking for the bigger picture. I do not believe there are single or simple answers to big questions but I believe many connections can be made with details. Symbols and motifs, all add up to a whole. Language is made up of complex symbols, colloquialisms, idioms and humor. A lot of these systems of language and understanding work like the structure and function of an animate human body. A body that senses, communicates, adorns itself, cleans itself, moves, ages, thinks, dies then decays. Language is animate too.

Visual Art has all the ingredients and complexity of the art of language and communication but it also has a real living body and materiality. Visual art becomes an object with its own cycle of life. An artist makes it and there it is, it exists. Almost excreted or vestigial yet vividly present and up for debate and analysis.

As an art-maker, I have tasked my artwork with a heavy load. Not only must it have its own language and ability to communicate but it must also contemplate the human condition and mortality, whilst simultaneously being a means of self-discovery. I feel metaphor, poetry, morality plays, allegory, wit, stories of monsters and science fiction are all examples of ways in which literature and drama as language communicate contemplation surrounding the attempt to encompass the scope of the human condition and mortality and be a journey of self discovery, for the author and the reader. I would encourage the reader of my visual art to approach my work in this way for it is the way in which I make it.

Imbued with meaning and motive, I am the maker of the artworks body. I build its core and surface. I give it structure. Through the tactility of the medium, I generate the life of a object or surface. I capture the dance of light on a surface. I capture the relief and texture of a surface. I create a surface by obscuring a surface of a sheet of paper or a canvas. A surface can be rubbed, removed, cut, scratch, polished, penetrated, smudged, gilded, adorned, torn, abused, dried, washed and wetted, amongst other things.

What about the ruins of a civilization now gone? Archaeologists and anthropologists excavate and reveal human remains, art, text, objects, tools, clothes, homes, tombs, all of that which served a human body and reveal its needs and inner workings, its beliefs and attempts at understanding itself and the processes of living and dying. Our understanding of a culture and civilization now gone is through these things that are left behind and survive time. When our planet is excavated by alien archaeologists, it will seem we all needed a lot of plastic. 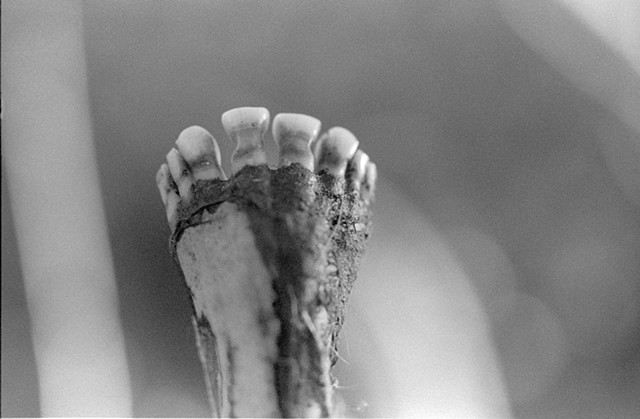